Yesterday was spent making saggers.  I’m sure you’ll be delighted to know I got them all finished (if only for the fact that maybe now I’ll stop writing about them…)!

I took a couple of breaks while waiting for the slabs to set up:

1) Meredith and I went looking for a specific ‘upscale’ thrift store.  It’s been getting colder here at night and we wanted to look for a cheap winter coats.  Neither of us bothered to pack one since they take up so much room in the luggage.  Do you know how to tell which store is a thrift store here and which one isn’t?  It’s easy – just look for the giant British flags in the windows.  These flags fly triumphant over the second-hand shops of Hungary.  Why?  I don’t know.  I was told that it possibly has something to do with the Brits (historically) sending a lot of hand-me-downs to Hungary.  Anyone know for sure?  I’d love to hear it!

1a) We found the store but it was closed (shops close here at noon on Saturdays and don’t reopen until Monday).  BUT, we happened to be in the neighborhood of “the best ice cream and pastry shop in town.”  So, of course we had to verify that claim.  They have 42 different kinds of ice cream.  We didn’t even look at the pastries.  I had the Riz (cinnamon), Mojito (SE), Malna (raspberry), and Erdomaster (triple berry-esque).  At this rate it will take me 10.5 visits to try them all.  I figure that on the 11th+ visits, I can start in on the pastries.  That case was at least as long, or longer than the ice cream case.

2)  Then we went back to the studio and I put together the slabs, and cut out the pieces for the last two and some lids.  While waiting for those to set up, we went to find the folk dancing and music.  We asked Peteris and Ilona to come with us, but they were busy glazing.  They’re firing their last kilns this week.  I wish they weren’t leaving the 1st week of October!

Anyway, we found the folk dancing, after some initial mishaps.  It was in the town square on the same stage that was set up the previous night.  These dancers and singers were a step or two above their predecessors, however.  It turned out that this was the Hungarian State Folk Ensemble.  (We didn’t know that beforehand.)  They were excellent.  I’ve never seen, heard, or experienced anything quite like it.  I’m struggling with how to explain it.  Maybe I should just bite the bullet and admit that I almost cried.  More than once.  You can’t laugh at me because you weren’t there!

Part of what made it work, in addition to the beautiful music (live), dancing, and costumes, was the respect given by the audience.  People stood patiently and attentively, in one place, for two hours.  They didn’t talk to their neighbors or fidget and complain because they couldn’t see or sit – nobody pushed anyone around to try to get “the best spot” even though the square was packed.  People very courteously looked behind them when choosing which area of cement to put down their roots, making sure that they weren’t blocking the view of a fellow audience member.  When I was videoing, a couple of different people walked in front of me.  They each ducked down and were careful not to jostle my elbows as they passed so as to not disrupt my picture.  Old people (from what I could tell) were given deference; they filled the vast majority of the seating area.  It was all very respectful.  I liked it.  In a way, it freed you from worrying about the other people around you and left you space to absorb the show.

At the end, when everyone wanted an encore, instead of whistling or yelling, the audience suddenly broke out into rhythmic (synchronized?) clapping.  I’d definitely see this group again, and if you’re ever in Hungary and have the same opportunity, I highly recommend that you seize it! 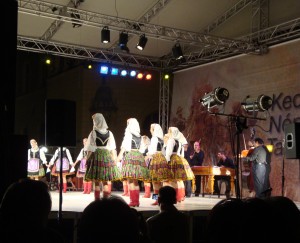 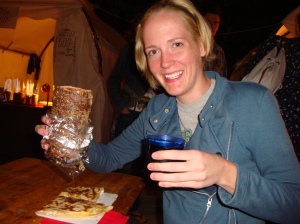 Traditional foodstuffs before the performance.

7 comments on “British Flags, 42 Ice Creams, and a Folk Ensemble to Cry For”