After hearing some horror stories about women traveling in Turkey, I was a little afraid to go to Istanbul.  I’m so glad I did!  It’s an amazing conglomeration of sights, sounds, smells, textures, tastes, and marriage proposals.  I’d definitely recommend it to anyone out there, and I’d love to go back some day.  My friend Beth and I started planning our trip a month or so ago.  Beth lives in Germany right now and since we haven’t seen each other in a while (a few years?) we decided to meet up while we’re on the same continent.  One of her other friends, Rachel, also joined us.

The trip to Turkey was quick and easy.  I hopped on a Turkish airlines flight from Budapest and a couple of hours later it landed in Instanbul.  I got to sit in the exit row, which was nice.  It was a bit weird though, because there weren’t any windows and I didn’t have a seat in front of me.  They fed us well too, which was completely unexpected.  On a 2-hour flight in the US you might get water or OJ or coffee or maybe pop and pretzels if you’re lucky. 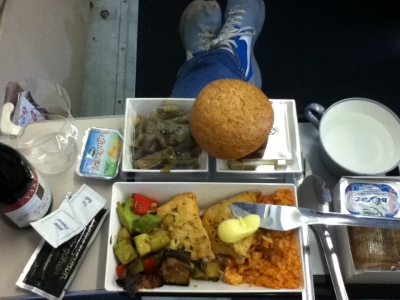 Description from the menu (yes, they handed out menus), "French green bean in olive oil, Grilled chicken medallions with mustard curry butter and ratatouille tomato rice, Plum cake, Ovenfresh bread." Pretty fancy, eh? I thought so! Please note how my legs are stretched alllllllll the way out. Ahhh! So nice!

So, once I got over the surprise pleasure of “free” food and scarfed it down, it was time to land.  When I got off the plane I wasn’t sure what to do because I was supposed to meet Beth and Rachel at the Starbucks on the International Arrivals level.  I had no idea where that was and I couldn’t find a handy-dandy map anywhere.  So I started asking questions.  Finally I was told to go through passport control.  I bought my visa ($20 US) and got in line.  It was long.  There was entertainment provided, however.  A little boy was being quite naughty, running away from his mom and grandpa.  First he ran to the left, out of the box full of switchbacks everyone winds through, so his grandpa had to duck under the railing and chase after him.  Unfortunately, he was a cute little guy and it was pretty funny, so lots of people (including me) laughed… encouraging him.  Whoops.  He proceeded to run away from them several more times, only these times he ran forward, past the passport checkpoint.  His mom had to keep running past the booths to grab him and get him behind the line.  They eventually made it through though.  I hope they went directly to a park, without passing go.

Beth and Rachel were waiting outside the doors you spill out of into a concourse.  It was a relief to see them.  We hit up an ATM for some lira and then went to the metro.  Their metro and tram stations are nice because they have helpful people stationed at them.  We had to ask how to work the token machines.  Why are they always so non-intuitive?  It seems like no matter where I’ve been in the world, it’s always a battle to figure out how to get the right ticket or token for the ride.

Anyway, we worked it out and rode to a different station where we got on the tram.  We got off at Sultanahmet, which was the closest stop to our hostel.  Sultanahmet is the area with most of the major tourist attractions.  It’s home to the Blue Mosque, the Hagia Sofia, Basilica Cistern, the Museum of Turkish and Islamic Arts, and a famous spire that I can’t remember the name of right now.  Topkapi Palace and the Archaeology Museum are very near as well.

It was dark even though it was only about 5:00pm, and we wandered around for quite some time.  We kept seeing all these cool buildings lit up but we had no idea where we were, so we didn’t know what we were looking at. 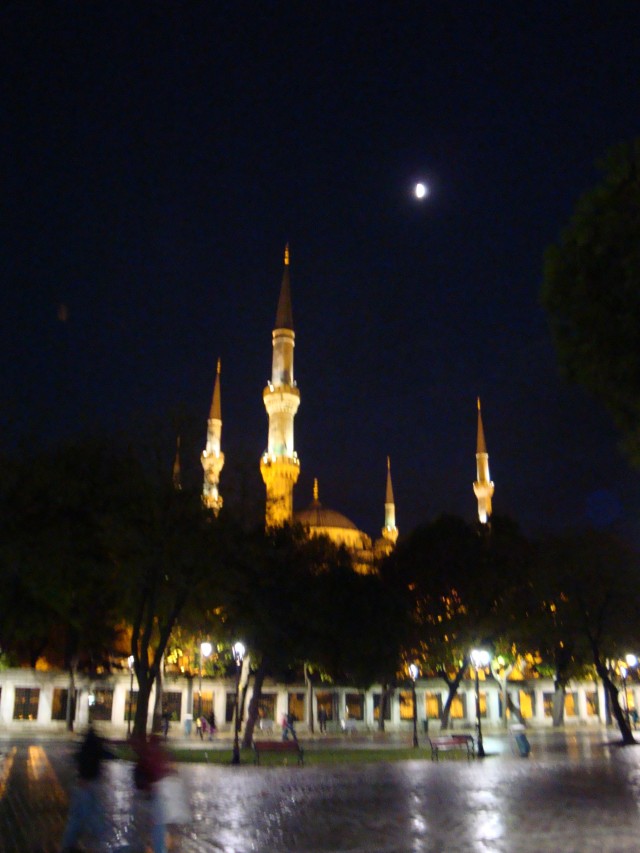 "Guys, I'm pretty sure that's something that's probably on the map." "Yeah, but which one?"

There were lots of people on the street but we didn’t know if it was okay to talk to them or not.  We’d read that it’s safest to just ignore all the men who approach you there.  And it was only men who were coming up to us and asking if we needed help. 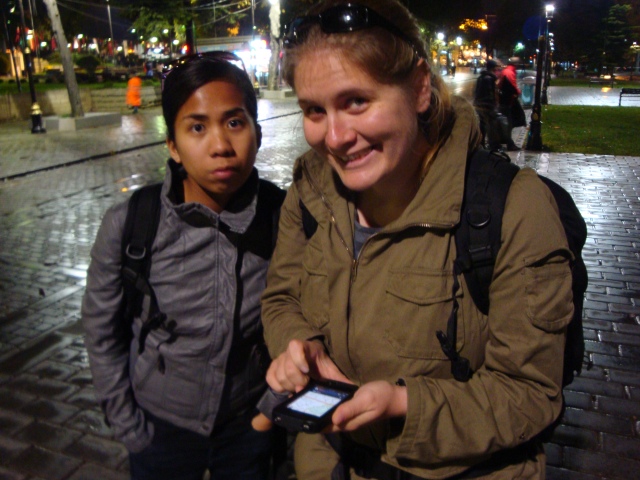 Rachel and Beth trying to read a map on the iPhone. We eventually gave up and switched to an old-school paper map.

Too bad cats can’t speak, because we saw hundreds of them on the streets.  Okay, maybe not hundreds, but dozens probably.  We finally found a policeman and asked directions.  He pointed us down a little street.  So we wandered in circles in a different, less monument-filled area for a while.  Then we asked some German tourists (who were all over, btw – half of Germany must have been in Istanbul this weekend) and then we asked a Best Western doorman.  And then we found it.  Sydney Hostel.  Home Sweet Home.

The guys running the hostel are really friendly.  They showed us our room, which stank to high heaven.  We had three beds and a private bath.  The beds and bathroom were clean, despite the noxious smell.  We opened the window, dumped our packs and went to find supper.  We ate at a place just up the street from our hostel.  It was delicious.  Sitting outside on couches blasted by powerful heaters, I think we all could have fallen asleep quite easily.  Our server was very friendly, like all of the men we met there; his first question for us was, “Where are you from?”  Every man we came into contact with there, all weekend, asked us this question.  We didn’t know what to do at first, so Rachel said we were all from China.  After some more questioning she said we were all from LA.  (Untruths, all of it, FYI.)  Pretty soon, our food came and we chowed down. 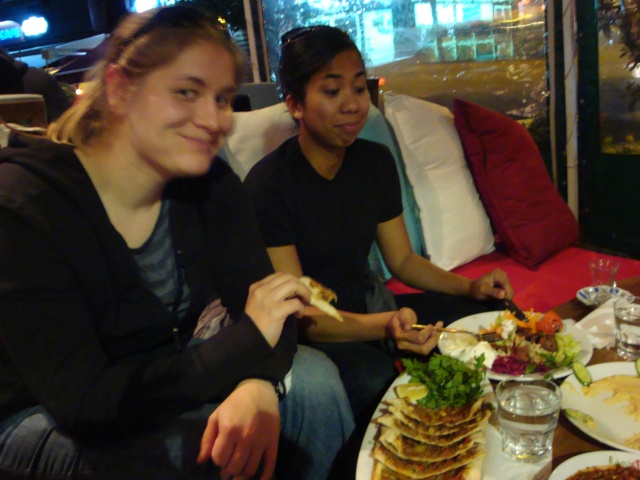 At the restaurant near our hostel. Food has never tasted so good! Rachel had lamb, Beth had ?, I had chicken shish. It was my favorite meal of the weekend.

We accepted some free apple tea after our meal but declined on the offer of a turn on the hookah or water pipe.  Ha! 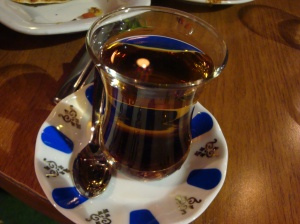 Apple tea "on the house" after our meal. Apple tea is big - they serve and drink it everywhere. It's not very 'tea-like' - it's sweet and more like apple Tang.

Paying the bill. Turkish restaurants frequently give you your check in a funny treasure box. You put your money inside and give it back.

After eating we went back to our lavender-walled and styrofoam-crown molding room at the hostel, planned our next day, and crashed.

9 comments on “Istanbul: The First Night”