The other day I was having a discussion with one of the Hungarian students here.  We were talking about slip trailers. 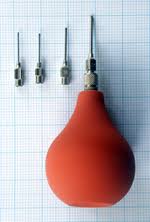 This is a slip trailer.  You use them to put designs onto clay.  Below is a picture of some slip-decorated pottery.  You can see how the blue and white areas are raised.  This is where lines of slip were laid down on to the pot.  You can think of slip as basically being clay that’s sort of watered down until it’s a thick liquid, with a colorant added to it (in this case maybe zinc or tin for the white and cobalt or copper for the blue).  You fill one of these slip trailers with the liquidy colored clay and then squeeze it out in patterns onto the pottery.

Slip-decorated pottery I saw in Instanbul.

Anyway, we were talking about slip trailers and somehow I mentioned that in the US we sometimes use those blue baby booger suckers as cheap slip trailers. 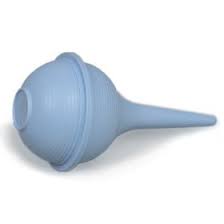 Here is one of those.

Then, I found out that in Hungary you can buy a special vacuum attachment for doing this particular job.  Hence this post’s title.  Apparently they’re good not only for babies, but also for when you have bad sinus congestion.  Sucks it all right out!  At first I was a bit appalled.  But now… I’m not gonna lie, I kind of want one… could come in handy some day!