Last night during dinner we were talking about milk for some reason. I said something about how, when I’m at home, I drink gallons of whole milk each week, but if I could get away with it, I’d drink straight cream. This morning, I looked on my shelf in the fridge and there sat a little container of whipping cream! What a marvelous present from a mysterious kitchen elf! I’m currently enjoying it in some thick, delicious hot chocolate.

I thought it’s probably time for me to upload some photos of this place! I’m enjoying my time here so far. I think I’ve talked about this before, but one of my favorite parts is that everyone takes a turn cooking dinner for everyone else, and then we all eat together every night. It makes a really nice sense of community and it’s a fun way to get to know people.

I still haven’t signed up for a night. I better do that today!

In the studio I’ve been making molds. I’m going to do some regular slip casting of some cups (of course) and bowls, but I’m also going to try slumping some porcelain-saturated sheets of fiberglass. I think it could be really cool if I can get it to turn out. Right now my biggest problem is that I don’t know the appropriate firing temperature for those pieces – I think the fiberglass might melt quite a bit earlier than the porcelain, so I need to be careful not to over fire them and cause a huge glass puddle to form in the kiln. That would not be fun for the other artists who use the kiln and it wouldn’t be much fun for my wallet, either!

Here are some pictures: 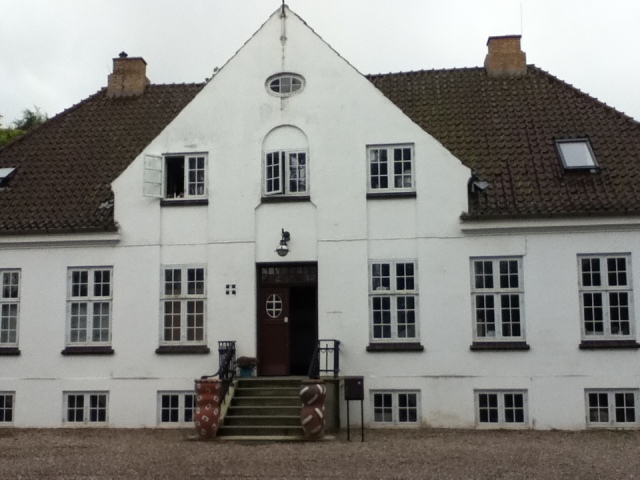 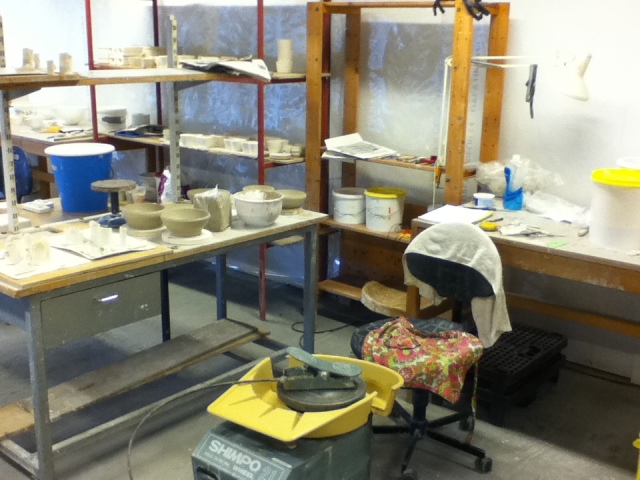 My studio space (notice the great apron I bought at the thrift store this afternoon!). My slump molds are on the left and my casting molds are in a dry box in another part of the studio.

Two more aprons, a spoon for my collection, and a tea strainer found at the thrift store today. I also bought an egg slicer for the studio kitchen – all together it was about $8. 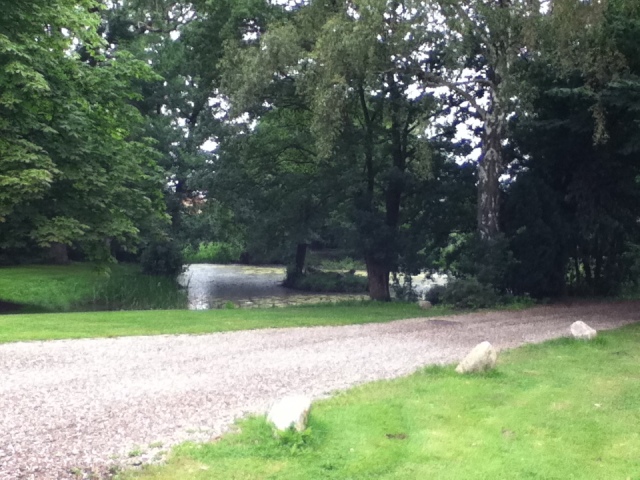 Pond near the studio that houses an extremely loud but somewhat charming family of ducks. 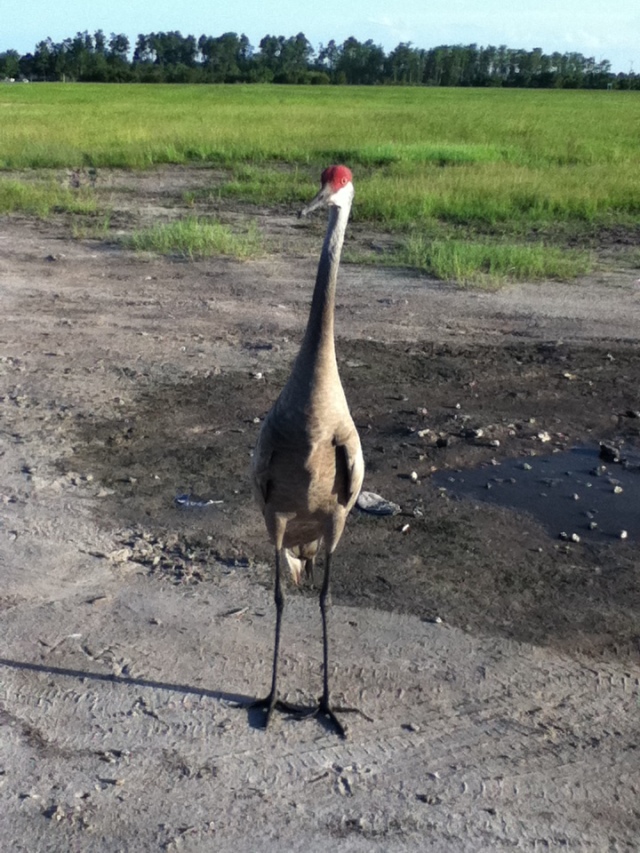 Remember to cheer for Amanda Smock in the Olympics! She’s from Melrose, MN and she’s the lone US Women’s triple-jumper at the Olympics. We ran together at NDSU and she’s one of the nicest people I’ve ever met 🙂 Triple jump prelims are on the morning of Friday, Aug. 3rd. Click on her name to read a little bit about her story.

Last night there was a showdown here at the residents’ house. A showdown highlighting my own personal superpower. Uh huh. That’s what I said. Superpower. Some of you dear readers might already be aware of this power. For the rest of you, please allow me to explain the wondrous ability which seeps from my pores.

I have the magical power to attract large insects and pests. I seem particularly adept at drawing them into the bathrooms of my residences. This power has reared its ugly head on several occasions. The first time I noticed it was when I was working construction for my cousin, John, out in Williston, ND.

What do you do when you get home from an evening out with friends? If you’re like me, you probably go into the bathroom to wash your face, brush your teeth, take out your contacts, blah blah blah. All normal, mundane stuff until you realize your foot feels kind of funny. Like there might be something on it. No biggie, right? You just shake your foot, with a bit of impatience, perhaps. Much to your dismay, a little Mickey shoots out from under the sink, blazing a daring escape under the bathroom door and into your tiny apartment. This small space, ordinarily cozy and comfortable, has instantly morphed into a giant, mouse-hiding abyss. Needless to say, your roommate is woken up thinking you’re being attacked. Two weeks later, you finally catch the little rascal on a sticky trap in the same bathroom, very near the scene of the first encounter. A neighbor may or may not be enlisted to dispatch Mickey to a land made of cheese and peanut butter.

At first, I thought this was just bad luck. And then I moved to New Bedford, MA, where I could not for the life of me keep giant centipedes from infesting my showers. That’s right, showerS, plural, centipedeS, plural. I lived on the main floor in one house and the upper floor of another and I couldn’t keep either bathroom free of those disgusting creepy crawlers. You can read all about one of those memorable evenings here.

And now that I think about it (this is really gross, you might want to stop reading), when I was in college I lived in the basement of an old house across the street from the university, and we once had earthworms in the tub. Honest to goodness live earthworms crawling up and out of the drain. Eew.

At any rate, I don’t know what I do to attract these things. Maybe this kind of stuff is normal and nobody else talks about it?? I think that’s what I’ll tell myself…

So Last Night. I went to take a nice hot shower (one of my favorite parts of my day). As I was setting out my shampoo and soap I noticed a disturbingly large spider in the place where the wall meets the ceiling, too high up to swat. He or she (Shim, from now on) seemed content to just hang out, however. So I decided to get in the shower and wash my hair. What do you know, as soon as my hair was wet, Shim started to mosey on over. Shim made shim’s way from the far right side of the shower over to the center. I tracked Shim’s progress very carefully and considered maneuvering the handheld sprayer into a “wash down” position, where in theory Shim would be washed off the wall and down the drain. However, Shim was the largest spider I’ve ever seen and Shim would not have fit down the drain. So instead, I watched Shim, holding the showerhead in my hand and pivoting in a circle to track Shim’s trek. At the end of my very brief and not-so-relaxing shower, I hurriedly stepped out and walked to the other side of the bathroom to dress and brush my teeth. Shim followed. At that point, it got a little too creepy (get it?) for me and I beat a hasty retreat. Chalk one up for Shim.

I thought I was safe until I got to my room and flipped on the light. A large moth promptly flew out in my face. Now, if I tell you something, you have to promise never to use it against me because I will de-friend you on facebook and possibly also in real life. I HATE moths. So much. My unkind feelings toward moths run almost as deep as my feelings toward centipedes. Moths have that special knack of flying out right at your face when you least expect it, surprising you into almost screaming, which makes you open your mouth, which then makes you shut your mouth right away because what if the moth flew in there? which then makes you wonder, “What if I’m not fast enough with the closing part next time and the moth gets inside my mouth?” Ugh. Probably irrational, I know. But maybe not. I bet there are people out there who have had this happen to them. I don’t want to be on that list. Long story short(ened), I won that battle by managing to shoo the moth out into the hallway with my towel.

I really hope my superpower becomes less super very soon, but if it doesn’t, stayed tuned… Any further incidents will be front-page news, I’m sure!