Hello there.  I haven’t posted in a while and I’m feeling distinctly un-motivated towards writing at the moment.  So, I’ll upload some pictures and then maybe explain them in short blurbs.  Ready??  I’ll start you off with a good one.

It’s about that time.  That is, it’s time to start eating up my stores of food in the fridge and cupboards of the ICS.  Here are some pickles from my fridge shelf.  Want to join me for supper tonight?

Now that my weird flu (which I think was actually salmonella from some fresh produce I bought) has cleared up and I can eat real food again, I’ve been attempting to eat cake and ice cream every day.  This ice cream was chestnut flavor, I think.  Not the best flavor I’ve ever had, but fun to try.

I went and visited the storage area for the ICS’s permanent collection earlier this week.  It’s pretty amazing.  Here are a couple images of pieces in it (I have a lot more pictures and some video of the collection, holler if you want me to send you some others).

Piece in ICS's collection (I forgot to write down the artist's name!)

The directorship of the studio has changed as of December 1st.  There was a small party for Janos Probstner, the former director and the man who founded the studio.  You can read more about these changes here. 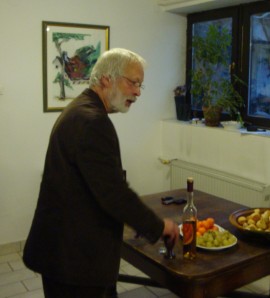 It’s not too late to sign the petition to help the studio.  You can reach it here: http://www.ipetitions.com/petition/savethestudio/#sign_petition.  They have 900 signatures as of right now.  I think 1,000 sounds nice, eh?  Get crackin,’ people!!  Thank you to my many friends and family members who have already signed.  You’re great!

The old synagogue in Kecskemet is a strange place.  The main floor is now a bar and karaoke lounge.  The entire place reeks like stale cigarette smoke.  Up on the second and third levels there’s a really strange display of plaster (?) reproductions of Michelangelo’s sculptures.  I went up to see them the other day.  I was glad I was there in the afternoon rather than the evening, because none of the lights were on.  They actually seemed completely disconnected – I tried the switches.  It was a little creepy at first, but then I decided to ignore the shadowy figures and give myself over to the beauty of the stained glass windows instead.

Strange display of reproductions of Michelangelo's work by Tolnay Karoly. 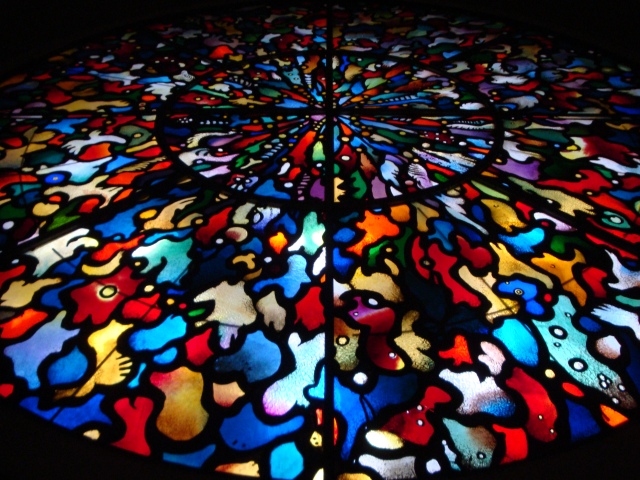 Stained glass window in the old synagogue in Kecskemet, Hungary.

Yesterday, I went to Budapest for the day to meet up with some of the Hungarian students I met here.  Merci invited Bette and me to go to her hairdresser for fun haircuts.  Her hairdresser is a young guy who likes to do extreme styles.  I figured, I’m in art school and I’ve never had an “art student” haircut before… so he cut off half of my hair (please forgive my broad stereotype there).  I like it. 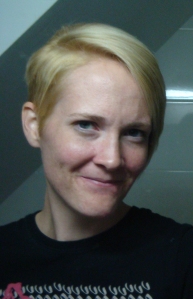 After haircuts, we ate and walked around the town for a little bit, exploring the Christmas Market and strolling along the Danube.  It was a fun day, despite how it ended….

Merci and I ended up randomly running into Meredith on the streets of Budapest.  She had also left the studio (separately from me) to do some things in the city.  So, we took the train back together.  Merci stayed in town (the Hungarian students have already had final reviews for their studio work).  Anyway, when we were about 5 minutes outside of Kecskemet, standing near our car’s exit, the train stopped.  Pretty soon we heard there was an accident and we’d be stopped for an hour or two.  I debated walking the remaining distance but decided not to.  We returned to our compartment and chatted with the other women we’d been riding with. 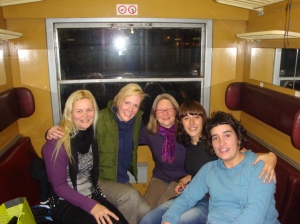 Two were students from the Basque country, and one was a very nice Hungarian woman.  About an hour into our stop, we found out that the train had hit a man and killed him.  We still don’t know the whole story – we thought it might be in the papers today, but apparently it was too late to make it to the press.  So.  That was a sort of unsettling way to end the evening.  I don’t quite know what to think about it.

Probably not the greatest way to end this post, either, but I don’t have any other news.  I’ll try to put up something with a happier ending in a few days.