Want to know the greatest way Ever to listen to different accents?  Wait for it…… Wait for it……  The secret’s in the Schwarzenegger.  For real.  All you have to do is ask someone how to pronounce the name of California’s former governor.  I don’t quite remember how it came up, but at the birthday party on Saturday night, I happened to say his name, and everyone around me said, “Whaaat??  Say it again!”  So I did, and then we went back and forth with everyone saying, “Arnold Schwarzenegger,” according to our language’s accent.  So we heard his name in Hungarian, Portugal’s Portuguese, Spain’s Spanish, Finnish, Irish, and French.  We each thought how the others pronounced it was hilarious, but I think we all agreed that the French accent was the best.

Other news that will blow your mind:  I have a kiln firing right now.  Aren’t you excited??  I thought so!  I packed my saggers this morning, and Jakob loaded them into the kiln for me early this afternoon.  It’s kind of nice not having to load the kiln.  (It’s one of the rules here, and it’s not one to be ‘bent,’ trust me on that….)  I’ll put some pictures below.  Most of the boxes are packed full of sawdust because it makes a really nice black, but I have one stack of “experiment” saggers in the kiln too.  Those are filled with a variety of things like acorns, acorn hats, dried up geraniums, juniper bush “leaves” (What are they called?  They’re not leaves and they’re not branches.  Hm.), and wire.

The saggers are really packed tightly because they haven’t fully shrunk yet, as they’ve only been bisqued (fired once, to a much lower temperature than this second firing).  I was worried Jakob would tell me I needed to take one stack out, but he just smiled and waggled his eyebrows and crammed them in the kiln.  Aha!  I wasn’t able to get as many tiles into each sagger as I thought I could, so I’m going to have to do four firings, at about $125 a pop.  Yikes.  Oh well.  It’s just money, right?  It’s not like I have to cut off a body part and put it in each firing or something.

With that lovely thought, I’ll take my leave for the evening!

Some tiles and saggers. I was happy; only three tiles crumbled into dust when I was packing them!

Here are the stacks of saggers. You can see that the bottom four on the left have been fired to temperature. That's what they'll all look like after this firing. Also notice the small blue plastic bag, which contains wad clay that (pardon my language) Smells Like Ass. For real. It was bad enough to drive everyone but me out of the kiln area when I was packing. It's the white stuff you see pressed into the cracks between the saggers here. And no, despite having washed my hands at least 5x since this afternoon, I haven't gotten rid of the stench. Yech. 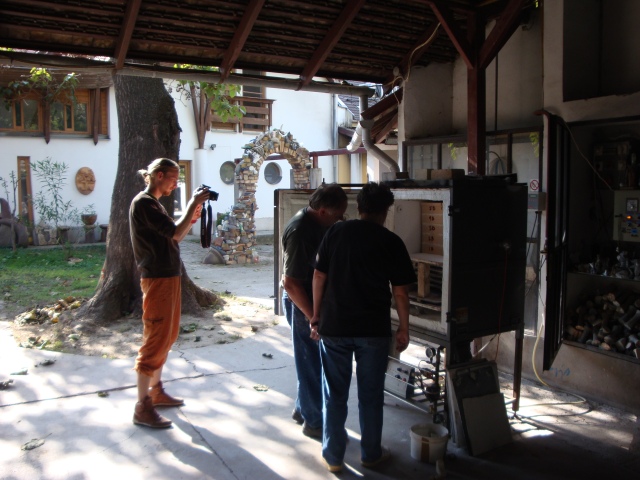 Jakob and Klara debating how to best pack the kiln, with Abel documenting (he's working on a special video project for the ICS with Janos, the director). Abel and I are going to try to do a collaborative piece, using my tiles and his videos.

The kiln is full!

Well, here I’ve sat, almost all day, writing for my thesis report.  (I’m currently trying to explain why I use light and what it Means.)  It’s not going well.  I’m going to go ahead and blame the fact that I’m starting to lose my ability to think properly in English.

Because this is an international studio, everyone speaks different languages.  (I know, I know!  Duh, right?)  The common language is English (Thank you, God!  There were some Francophones at the birthday party this weekend, and despite my six years of French, I had no idea what they were saying.) but most everyone’s background language is different.  So everyone has a different “base” that they bring to the table.

For example, the Hungarian language doesn’t use distinctions like “he” and “she” – everything and everyone is “it.”  Also, you know how in other languages the adjectives belong in different places than they do in English?  Well, prepositions get moved around too.   So, I’ve gotten in the habit of restructuring my sentences, to make conversations easier.  And I’m starting to think that way too.  I find myself writing sentences and upon rereading them I have no idea if they’re grammatically correct.  I write something, and then read it, and then think, “That sounds strange.  Is it wrong?”  And I don’t know the answer.

So, Charlotte, Jim, Susan, and Deborah, if you’re reading this, I apologize in advance for my thesis report!

In all seriousness though, I’ve been very impressed by how many of the people I’ve met here, both in and out of the studio, speak English and speak it very well.  Like I said earlier, I’m grateful I’m not having to try to make myself understood in French, which I supposedly learned, or Hungarian, which is completely foreign.  Kudos to anyone out there who’s even partially mastered a second language!  You have my admiration and envy!

Here is a random picture for you to look at – I hope I haven’t posted it before: 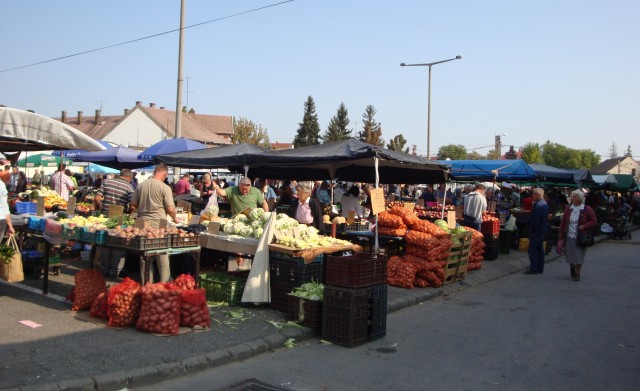 PS  Mrs. Carney was my seventh-grade English teacher.  She was a pretty great teacher.  Strict, but great.  🙂