I avoided having a sick-at-heart attack today by immersing myself in fifty minutes of my stressed-out drug of choice, online television. I’m in the midst of firing a kiln, the one and only (very expensive) gas firing I’ll do here in Denmark. The kiln contains all of the work I’ve made thus far in my residency and it’s one of the strangest kilns I’ve ever seen – some sort of fancy, smart, uber-efficient Danish contraption. 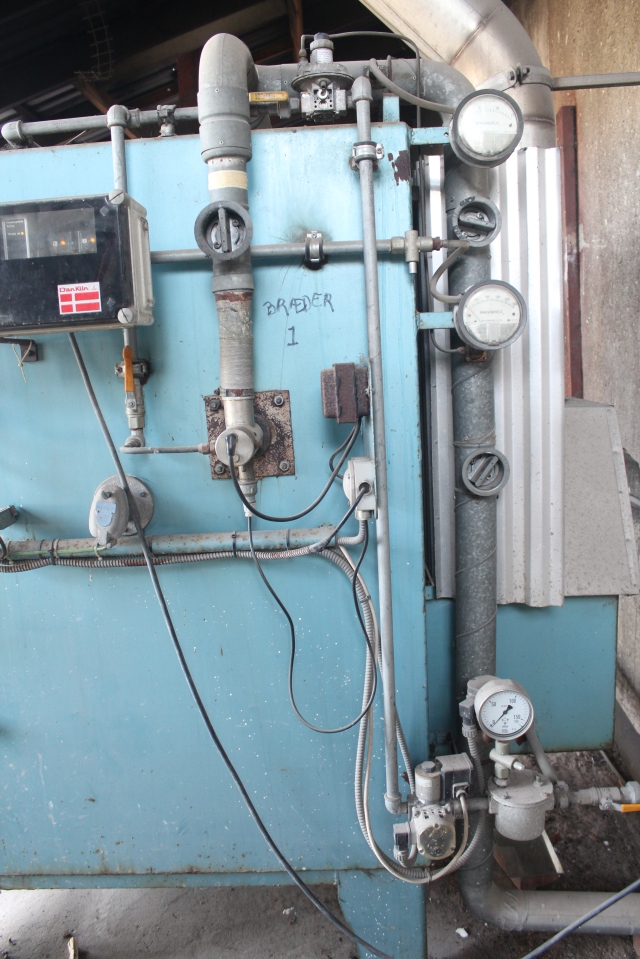 I thought I was doing pretty well with it until 4:00, when I noticed that cone 04 had just fallen on the bottom, but cone 9 was in the process of falling on the top. Whoa.

I’ll try to translate that here for you non-ceramists, who probably think I’m some sort of weirdo. At this point, I thought the top of the kiln was several hours hotter than the bottom and there was basically no way I’d have enough time to get the two to match each other. This is a problem because I’d have to shut the kiln down when cone 12 fell on the top, no matter how far behind the cones on the bottom were, for fear of overfiring the top of the kiln and turning the pieces up there into something akin to melted glass. 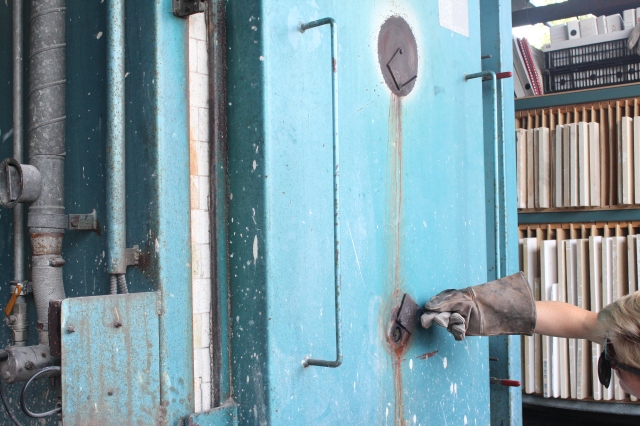 Checking the cones. There are cones behind each little swinging flap.

The difference between porcelain that’s fired to cone 04 and porcelain fired to cone 9 is pretty drastic. 04 is basically a really hot bisque, and 9 is the very low end of porcelain maturation. [For a short explanation of what cones are and what they do, please read this post: https://amyuthus.wordpress.com/2012/02/04/into-the-fire/.] Bisqued porcelain is pink, porous, crumbly-fragile, and non-translucent, among other things. It hasn’t been fired hot enough for a glassy matrix to form. Porcelain that has been fired to its maturation point is white, hard, waterproof (or “vitreous”), and translucent. I’m not interested in bisqued porcelain; it’s of no use to me until it is fired to vitrification.

Bisque on the bottom would mean I spend a lot more time and money to refire the work in that kiln. I’m extremely short of both, so you can see why I was sick about the drastic difference between the top and the bottom. I checked the cones 6 or 7 times before I believed what I was seeing. I also looked at the color of the kiln, another way to check the heat. It was slightly different, but not to the point where there would be such an enormous difference in the cones. I checked them again. And again. Still bad. I decided my only option was to reduce the crap out of the kiln in an attempt to get the heat to sink to the bottom (this sometimes works for small differences in heat). Next decision: walk away and shut my brain off for a while. So I went up to my room and watched an episode of True Blood. (Don’t you dare laugh at me! Just kidding, I’m laughing at myself. That show is terrible. But so addicting.)

When I came back, mind sufficiently numbed, Voila! Cone 9 was standing there on the top, plain as day. To me, it was a little bit like seeing the Eiffel Tower. Ah… so beautiful! I don’t know what was going on before, but I sure couldn’t see it. Nevertheless, I felt reassured. I’d decided to watch tv mostly to kill time while I waited to see if heavier reduction would help, but also to drown out that doubtful little voice which was saying lovely things like, “You don’t know what you’re doing. Who are you to think you can fire a new-to-you kiln properly the first time? And you think you can teach other people? Yeah right.”

At any rate, the last time I checked, the kiln was perfectly even. Sookie and Bill and Eric still inhabit the earth, and all is well.

I went for a walk by the lake a couple of nights ago. It was sorta pretty…