Here are some pictures from the weekend!  It’s Johanna’s birthday today.  She and Rebecca had a party yesterday at their apartment with several international students.  Johanna’s from Finland and Rebecca’s from Ireland.  Have I said that before?  Sorry.  They’re both here through the Erasmus Programme.  Anyway, Johanna graciously invited me to celebrate with her 🙂 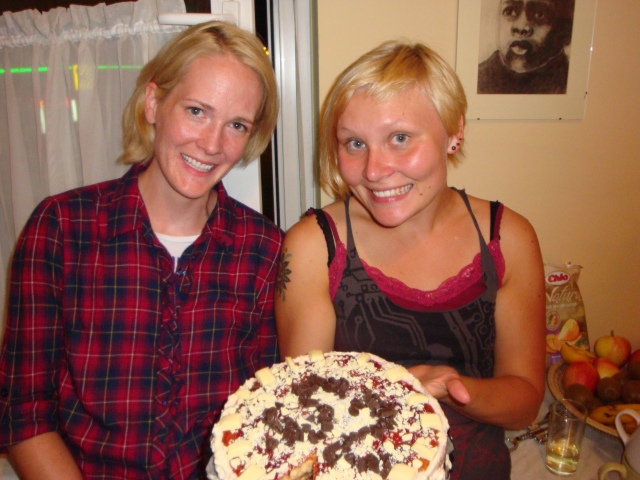 Earlier in the day, Meredith and I walked to what’s proving to be an elusive thrift store – It was closed again, this time due to their changing out the stock.  (We only know this because a young Hungarian guy took pity on us standing confusedly next to the locked door and translated the sign for us.)  So, we went for birthday cake and ice cream instead.  Yum!  These nicely sized cubes of heavenliness cost between $0.70 and $1.16.

Birthday cake - it was custard-y deliciousness! Thanks, Meredith! 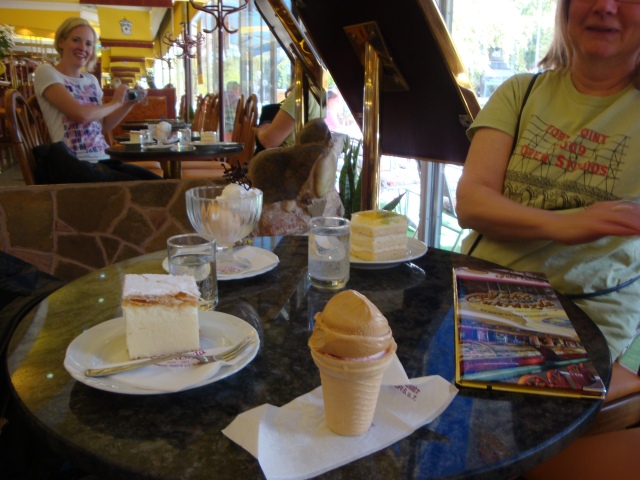 Hello there!  Today’s my birthday.  I’ve had a very nice day.  I started it off by sleeping in and then opening my packages from home while still in my pajamas.  One gift was a pair of slippers, so I put them on right away.  Perfect!  (Thanks, Jen!)

Then I downloaded some Micheal Jackson with an itunes giftcard.  Heck yes.  Some of the greatest studio work music, I believe.  Right?  Another grad student at UMassD and I used to have Micheal Jackson Sunday Mornings, where we’d crank his music in the studio because we were the only ones in there at that time.  It’s a nice little slice of home, to have the same songs pouring through my headphones here.

I scrounged the studio complex for ware boards today and was moderately successful.  I’m making 300 tiles that are 15cm square, so I need quite a few boards to put them on until they can be fired.  I’d used all of the ones that were up for grabs in the student workroom, so I had to hunt through the other common areas.  I found 5 or 6, which will get me through the weekend.  I’m hoping I can do a firing of 100 tiles on Monday, even though I’m not scheduled until Wednesday.  That would free up the boards to be used again for the next round.  Wish me luck!

This evening, Meredith and I walked to an Italian restaurant called Cezar’s.  It was really good.  The menu translations were funny – this is what I ordered: 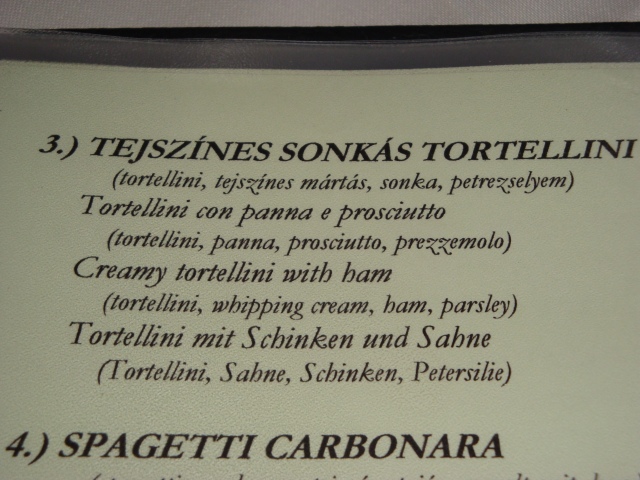 This is what I was served:

It was really good, and enough for two meals, so I’ll have it again tomorrow 🙂

Before I say goodnight – Thank you to everyone who’s written on my facebook wall, sent a card, or emailed me birthday wishes.  I feel lucky to have so many kind people in my life.  Several people here in the studio also wished me a happy day today and gave me small gifts.  This is a really nice community and I’m blessed to have met everyone here too!